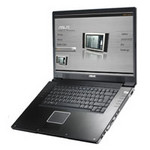 Reviews for the Asus W2J

The Asus W2J is the best thing if you want a media center in a box but also want the functionality of a portable computer. The bundled remote control, TV tuner, and multitude of audio and video inputs and outputs make this a media powerhouse that is hard to match. Using the laptop as a HTPC from the couch has a certain appeal, and the fact it's portable enough to bring along with you onto the road means you never have to be without your favourite shows. You can even listen to FM and broadcast stations easily which could be fun to use while on a train or a long commute.
sehr umfangreicher und voll ausgestatteter Testbericht mit vielen Seiten