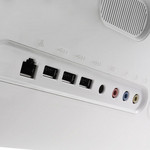 Archive.org version
For the same $500 or so it will cost you take home an Eee Top, you can admittedly buy a low-end desktop and monitor equipped with a dual-core CPU, more RAM, a larger hard drive, and a DVD drive to boot. That PC will undoubtedly perform better than the Eee Top, but it will also be noisier and more power-hungry, take up a lot more space, and it won't include your niceties like a touch-screen or integrated Wi-Fi. Deciding between the Eee Top and $500 worth of full-size laptop is a tougher call, but the latter still won't give you the touch screen or the aesthetics that the Eee Top delivers. Like the netbooks from which it spawned, the Eee Top comes with its share of compromises, and isn't suitable as a primary PC. But if you need wireless Web connectivity and basic computing capability in a tight space -- a kitchen, a bedroom-and value cool looks and touch-screen convenience, the Eee Top PC ET 1602 should be on your shopping list.
Leistung 70
Single Review, online available, Medium, Date: 05/05/2009
performance: 70%