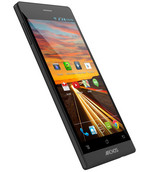 Reviews for the Archos 50c Oxygen

82% Archos 50c Oxygen Smartphone Review | Notebookcheck
The power of eight cores. Care for a five-inch HD screen alongside an octa-core SoC for 200 Euros (~$268)? Archos delivers on specs that are anything but common for this price range. Thus, we remain curious as to whether the manufacturer manages to fuse the components to a rounded total package. In that case, it would be a small deal breaker.
88% Archos 50c Oxygen
Source: SFT - Heft 10/2014

Archos: The French manufacturer Archos S.A. was founded in 1988. While they initially produced products such as MP3 players, they have started producing laptops, smartphones, and tablets in 2009.

The world market shares are small, but there are many reviews on Archos smartphones and tablets. While the ratings were below average in the early years, they have become better by 2016.