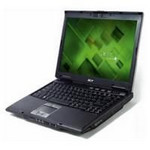 Reviews for the Acer Extensa 7620Z

The Acer Extensa 7620Z is a big and well-built machine that makes the most of its 17-inch screen. Sadly, it isn't as powerful as we were hoping, but as long as you place screen quality above processing power, you'll be happy with what this machine has to offer.
3.5 von 5, Preis gut, Display gut, Verarbeitung gut, Leistung schlecht, Ausstattung schlecht
Single Review, online available, Short, Date: 10/13/2008
Rating: Total score: 70% price: 80% performance: 40% features: 40% display: 80% workmanship: 80%

NVIDIA GeForce 9300M GS: Compared to the 9300M G, the GS has only 8 unified shaders but a higher clock rate. Therefore, the performance should be similar according to Nvidia. Supports
Hybrid-SLI (GeForceBoost and HybridPower) with Nvidia 9100M G and PureVideo HD (VP3).

Middle class dual core CPU with a TDP of 25 Watt. For high end gamer the performance could be not sufficient (for class 1 graphic cards).