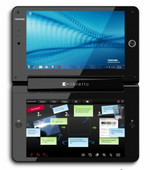 The lower screen can be used with Toshiba’s Bulletin Board, which lets you create virtual messages and to-do lists. You can manipulate the content with multi-touch commands, but again it’s just too much of a hassle to fiddle around with it. You can also access the Toshiba Board, which provides information about the computer and the pre-installed software; however, this is of limited usefulness.
Single Review, online available, Very Short, Date: 10/13/2010
Toshiba Libretto W100 review: First look
Source: It Pro

The Libretto isn’t a completely new form factor for Toshiba. Indeed, the company has had sub-notebook Libretto models for many years, although they haven't always been on sale outside Japan. The bet is that the interest in tablets and the excellent touch support in Windows 7 will make this unusual and flexible design more mainstream. All your favourite Windows apps will run well on the W100. What it really needs are apps that show off its unique strengths.
Single Review, online available, Medium, Date: 06/22/2010

The Toshiba Libretto W100 is a unique ultra-portable PC. It's hard not to love it for its geek factor and uber-daring design; and it targets you well-heeled gadget freaks rather than everyday users. A few years from now, we suspect Toshiba and other manufacturers will offer versions for the average consumer, and the anniversary edition Libretto is testing the waters. The dual touch screens are sharp and responsive, and Toshiba's done a good job of tweaking the UI to make the device more usable. From the virtual keyboards and trackpad to enlarged windows control elements and zooming, Toshiba has worked hard to make the Libretto pleasant to use rather than a chore. Still, it's hard to overcome the fact that Windows 7 wasn't meant to be used with a touch screen this small and we found ourselves reverting to the virtual trackpad more than we liked.
Single Review, online available, Short, Date: 09/13/2010
Rating: Total score: 80%
20% Toshiba Libretto W105
Source: PC Mag

The Librettos are masters at miniaturization, but there are just too many flaws with the W105.
Single Review, online available, Short, Date: 09/03/2010
Rating: Total score: 20%
50% Toshiba Libretto W105
Source: Laptop Mag

For nearly 15 years, Toshiba has been using the Libretto line to test out new concepts and devices. The Libretto W105 is the latest such experiment, and viewed in that regard, it's an intriguing addition. In both design and price, this $1,099 device is meant for early adopters and gadget junkies who will put up with its quirks. It has a number of clever user-interface innovations that make the device easier to use than other Windows 7 tablets. Overall, though, the W105's short endurance, high temperatures, and lack of touch apps beyond what Toshiba bundles make this device more of a curiosity than a breakthrough.
Single Review, online available, Medium, Date: 09/02/2010
Rating: Total score: 50%
Toshiba Libretto W105
Source: Wired Magazine

Dedicating half your laptop to 80-odd keys is such a waste of space, at least, that's the message we're getting from the new Toshiba Libretto W105. With two 7-inch touchscreens, the 1.2-GHz machine does triple duty as a notebook computer, media player, and e-reader. Juggling serious work?
Single Review, online available, Very Short, Date: 07/20/2010
Rating: mobility: 80%

U5400: Entry level dual core CPU of the Arrandale series. Does not support Turbo Boost (for the CPU), Hyperthreading, Virtualization and AES. Due to the slow clock speed, the performance is only sufficient for non demanding applications.

53.33%: Such a bad rating is rare. There exist hardly any notebooks, which are rated worse.