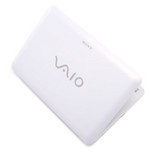 Reviews for the Sony Vaio VPCW12S1E

Archive.org version
Sony has taken quite some time to get stuck in to the netbook market. With plenty of competition out there, an impressive showing is needed to mark yourself out from other models. A nice looker this W12, however looks aren’t everything and it’s a shame that Sony didn’t go for better components. Moreover, the 6-cell battery sticks out quite a bit, which may be problematic when carrying it around.
Single Review, online available, Medium, Date: 01/15/2010
Rating: Total score: 60%