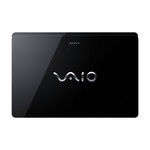 Reviews for the Sony Vaio VPC-F215FX/BI

If 2010 was the year of the 3DTV, perhaps 2011 is the year of the 3D laptop. Despite not receiving nearly the same level of hype as stereoscopic televisions, we've seen more 3D-enabled laptops this year than ever. Sony makes some of the best-looking multimedia laptops out there, and the 3D Vaio F215FX is no exception. But you'll have to be willing to pay extra for that sharp design.
Single Review, online available, Medium, Date: 09/27/2011
Rating: Total score: 70% performance: 70% mobility: 60%
70% Sony VAIO F 3D Review
Source: Laptop Mag

The $1,799 VAIO is a compelling multimedia laptop for those who crave 3D. The 240-MHz, full-HD screen combined with Nvida's 3DVision technology adds a new level of enjoyment to watching movies and playing games. We also like the backlit keyboard on this 16-inch notebook, as well as the sleek design. While the 3D experience isn't as immersive, some may prefer the HP Envy 3D. For $200 less, that machine offers much faster frame rates. And consumers willing to sacrifice performance and 3D quality in favor of affordability and longer battery life will want to check out the $999 Fujitsu LifeBook AH572. Overall, though, the VAIO F 3D is a tempting choice for media mavens searching for a high-quality 3D experience.
Single Review, online available, Medium, Date: 06/21/2011
Rating: Total score: 70%
70% Sony VAIO F-Series (VPCF215FX)
Source: PC World

As configured, our laptop cost just under $1900, which is fairly pricey for what we got. Overall, the VAIO F-Series appears to be a solid multimedia PC with limited gaming chops and a crisp display that is perfectly capable of showing off stereoscopic 3D movies. But the beauty is entirely under the hood: If you don't mind the unsightly exterior and are willing to pay the Sony premium, the F-Series is worth a closer look.
Single Review, online available, Very Short, Date: 04/28/2011
Rating: Total score: 70%
89% Sony VAIO F Series (VPCF215FX/BI)
Source: Computer Shopper

So far, the implementation of true 3D for movie playback and gaming in laptops has been spotty at best. Leave it to entertainment behemoth Sony, though, to top all the competition in terms of 3D. Speedy performance and engaging true-3D graphics make this VAIO a winning entertainment notebook. (Just be prepared to pay.)
Single Review, online available, Long, Date: 04/01/2011
Rating: Total score: 89%

74.75%: This rating is bad. Most notebooks are better rated. This is not a recommendation for purchase. 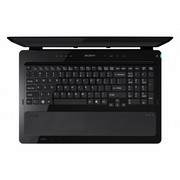 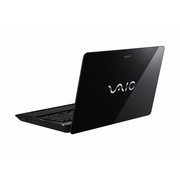