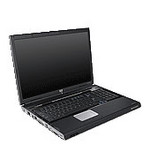 Reviews for the HP Pavilion dv8299XX

Another big and hefty notebook, the HP unit continues with the same silver and black motif we saw with our first two roundup candidates. Like the Fujitsu, the HP's upper deck has a matte finish, but it takes a bit more effort to smudge or smear its surface (it does show fingerprints more than the Acer, however.) The bottom deck is metal on the front third and uses a matte finish black plastic for the rear two-thirds, which is also used for the palm rest on the top of the keyboard deck. Like the other notebooks, this one also has six rubber feet to protect and cushion whatever surface it sits upon.
ausführlicher Vergleichstest von Notebook-Modellen; Test ist online abrufbar