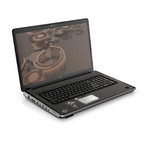 Reviews for the HP Pavilion dv8-1250ea

Archive.org version
If you're seeking a high-powered, bigscreen media centre for enjoying games, music and HD movies with the whole family, the Pavilion dv8-1250ea has a lot to offer. While it can't quite match the power of the Sony and Toshiba Satellite A660-18N, this is still a stunning Core i7-powered laptop and one we like a lot.
Single Review, online available, Very Short, Date: 09/18/2010
Rating: Total score: 80%

The Core i7-620M is the fastest Dual-Core CPU for laptops (at the time of introduction in Q1 2010). The 620M clocks betwenn 2.66 and 3.33 GHz due to the Turbo Mode and because of Hyperthreading, 4 threads are executed simultaneously. In the package, Intel also included a second die with an integrated GPU (GMA HD) and a memory controller. Therefore, the TDP of 35 Watt of the whole package is still quite good.