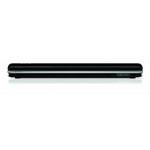 Reviews for the HP Pavilion dv7-3164cl

HP's flagship desktop replacement—the Pavilion dv7—17-inch desktop replacement laptop has more configurations than you can fit on a piece of paper It's hard to spot the differences from the outside, since most of them assume the same basic design, keyboards, and connectivity ports. The HP Pavilion dv7-3164cl should be cheaper, since it's not as speedy as its peers.
Single Review, online available, Medium, Date: 03/25/2010
Rating: Total score: 60%

M520: Entry level dual core CPU by AMD which features an integrated memory controller (400MHz DDR2) and is based (partially?) on the K10 core. The performance should be most of the times compareable to a 2.0 Celeron Dual Core / Pentium (sometimes even to a 2.4 GHz Core 2 Duo).» Further information can be found in our Comparison of Mobile Processsors.