For an entry-level laptop, the Compaq Presario CQ62-225nr ($499.99 list), available at Staples, has a lot going on. It offers a roomy 15.6-inch display, a full-size keyboard, and a modern dual-core processor. It also boasts a design that belies its entry-level status, since HP recently updated the design of its Pavilion and Envy laptops, and that makeover extends down to the bargain Compaq line. The Compaq CQ62 is one of the cheapest laptops you'll find at Staples, particularly if you exclude outdated models on clearance. The CQ62-225nr's Athlon II P320 processor is part of AMD's recently introduced 2010 Mainstream "Vision" platform, and the laptop provides fair performance for mainstream use along with fairly lengthy battery life. Most entry-level laptops harbor a deal-breaking flaw, but we can't find one on the CQ62-225nr, just a few minor annoyances. The lack of a Webcam will disappoint many users, and you also must make do without an HDMI port and a media card reader. The keys tend to squeak a bit, too.
Single Review, online available, Short, Date: 06/23/2010
Rating: Total score: 60% 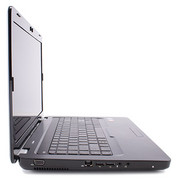 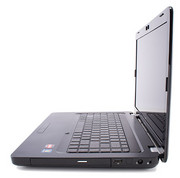