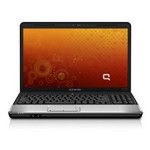 Shopping for a laptop under $600 is a bit like going for the half-priced, late-afternoon sushi special at your local deli--there's a certain risk versus reward calculation that has to occur. While it's not going to win any awards for flair or style, this anonymous-looking 15-inch retail model from HP offers the best combination of features and performance in its price range. The $599 HP G60-235DX has a 16:9 display, an Intel Dual-Core CPU (many budget systems use slower AMD chips), and even squeezes in a separate number pad. HP's anonymous-looking G60-235DX is one of the better overall values you'll find on retail-store shelves for under $600.
60, Leistung 80, Display 80, Mobilität 80
Single Review, online available, Medium, Date: 02/13/2009
Rating: Total score: 60% performance: 80% display: 80% mobility: 80%
48% HP G60-125nr
Source: CNet

T3200: Entry-level dual core processor with a slow performance due to the old Merom core and a small level 2 cache.» Further information can be found in our Comparison of Mobile Processsors.

54%: Such a bad rating is rare. There exist hardly any notebooks, which are rated worse.