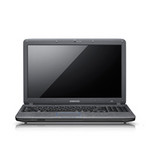 T3100: Slow clocked entry level dual core CPU with 64 Bit functions enabled. As the T3100 lacks Speedstep and other power saving functions, the power consumption is higher than of a similar clocked Core 2 Duo / Pentium.» Further information can be found in our Comparison of Mobile Processsors.

69%: This rating is bad. Most notebooks are better rated. This is not a recommendation for purchase.