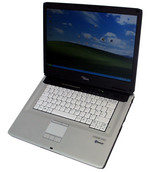 Reviews for the Fujitsu-Siemens Lifebook C1410

Fujitsu-Siemens: Fujitsu, founded 1935, is a Japanese company specializing in semiconductors, air conditioners, computers (supercomputers, personal computers, servers), telecommunications, and services, and is headquartered in Tokyo. Fujitsu employs around 160,000 people and has 500 subsidiary companies. The partnership with Siemens AG was established in 1999 in the form of Fujitsu Siemens Computers (FSC), one of Europe's largest IT hardware suppliers, and owned 50/50 by Fujitsu and Siemens. 2009, this cooperation was terminated, FSC ended to exist. In future, no laptops will be sold with the brand "Fujitsu-Siemens" but only "Fujitsu".