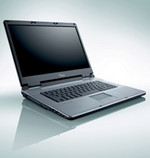 This machine is not going to make any headlines but succeeds as an inoffensive machine that's pleasant to use, fine to look at and not too painful on the wallet. It's not really suitable for regular use on the move or for gaming, but as a household workhorse, it's a winner.
ausführlicher Test mit Geräteaufbau und Testwerten und Bildern; online abrufbar

Once you start dipping below £500, it's much harder to scout out the right notebook for your needs - at this price, it's almost inevitable that something has to give. And while the Amilo isn't the cheapest notebook we've ever seen, it's not far off - remarkable given some of the treats inside.
On first impressions, the Amilo chassis is one of the most outwardly basic to come through our doors. The design is unapologetically plain, with only the silver-finish lid providing any sort of decorative flourish. The rest of the exterior is also conspicuously bare - aside from the 56K modem and 10/100 Ethernet ports, you'll find just four USB ports and a VGA out. There's no serial or parallel, no PC Card slot or FireWire, and certainly nothing as forward-looking as an ExpressCard slot or media card reader.
4 von 6, Preis/Leistung sehr gut, Ausstattung mäßig
Single Review, online available, Medium, Date: 08/14/2007
Rating: Total score: 67% price: 90% features: 60%
Review: Fujitsu-Siemens Amilo Li1718
Source: vnunet.com

A low-priced student notebook that’s blighted by outdated graphics.
As schoolchildren and students, or at least their parents, gear up for the new academic year, notebook manufacturers are starting to plug their bargain-basement PCs to those whose needs stretch to little more than office and internet use. As expected, the latest Fujitsu-Siemens notebook has shunned Intel’s new Santa Rosa platform in order to keep the price down, so there’s no advanced features such as Draft-N wireless or Turbo Memory. The computer has an Intel Core 2 Duo T5300 processor running at 1.73GHz, so it’s no slowcoach, but it’s not going to be at the front of the race either. The 2GB of memory supplied as standard is a welcome addition, however, and alleviates the poverty of the Li1718’s graphics performance. The graphics card is an ATI Mobility Radeon Xpress 200M with 256MB of dedicated memory. While a separate rather than an integrated graphics card usually indicates decent performance, this model is old and struggles to cope with recent developments, particularly in gaming.
Leistung mangelhaft, Mobilität gut
Single Review, online available, Short, Date: 07/31/2007
Rating: performance: 50% mobility: 80%
80% Review: Fujitsu Siemens Amilo Li 1718 notebook computer
Source: vnunet.com

Although it's only the beginning of the summer holidays, Fujitsu Siemens is already offering forward-thinking parents a head start for next term with what it calls a 'back to school special'. The special in question, which is only available in Tesco shops from the beginning of August, is the Amilo Li 1718, a 15.4in notebook computer with an Intel Core2 Duo processor. Such notebooks are, it's fair to say, ideally sized for students – while they're not small enough to be truly portable, they offer a large enough screen size to make them comfortable to use. This one is very much a no-frills model, as indicated by its sub-£500 pricing, but, again, that's what's required from such a computer. The main functions – general Windows use, web browsing, email and word processing – are all present and correct, and work very well. The processor, a Core2 Duo T5300 running at 1.73GHz, is not a slowcoach, but it's nowhere near the fastest in Intel's range.
4 von 5, Preis/Leistung gut, Leistung schlecht
Single Review, online available, Short, Date: 07/12/2007
Rating: Total score: 80% price: 80% performance: 50%

It's cheap and cheerful. If you're after a low-cost second laptop, or something for the kids, then you could do a lot worse than the Fujitsu Siemens Amilo Li 2727. If you're serious about computing, though, you should look elsewhere and prepare to shell out more. The Medion Akoya S5610, for example, offers much better multitasking and graphical performance for £600.
6 von 10, Preis gut, Leistung mangelhaft
Single Review, online available, Medium, Date: 08/20/2008
Rating: Total score: 60% price: 80% performance: 50%
FSC's Amilo Li2727 offers great value for money
Source: Fudzilla

The Amilo Li2727 is a workhorse, a grunt. There's no fancy design details or features, but it gets the job done. We think we were a bit too harsh in some aspects, so let's get one thing straight: in the end there's really not much to complain about. It looks nice, the keyboard and touchpad are good, albeit the touchpand could use a scroll bar. The build quality is good, it's got a dual core CPU, enough memory to cope with Vista's cravings and a spacious 250GB HDD. Its performance is not stellar, but it's more than adequate. The dual-core Pentium T2370 is clocked at 1.73GHz, has 1MB L2 cache and uses a 533MHz bus. The memory is also runs at 533MHz and the 5400rpm HDD is quite fast and quiet. There's no Webcam, card reader, Firewire, ExpressCard, fingerprint reader and other fancy stuff. However, most people don't really need these features, anyway (we don't). Thanks to its spartan design, FSC managed to keep the price down and that's where the Amilo Li2727 really stands out from the crowd. At €550 you'd be hard pressed to find better value for money.
Verarbeitung gut, Leistung gut, Preis sehr gut
Single Review, online available, Long, Date: 04/18/2008
Rating: price: 90% performance: 80% workmanship: 80%

Fujitsu-Siemens: Fujitsu, founded 1935, is a Japanese company specializing in semiconductors, air conditioners, computers (supercomputers, personal computers, servers), telecommunications, and services, and is headquartered in Tokyo. Fujitsu employs around 160,000 people and has 500 subsidiary companies. The partnership with Siemens AG was established in 1999 in the form of Fujitsu Siemens Computers (FSC), one of Europe's largest IT hardware suppliers, and owned 50/50 by Fujitsu and Siemens. 2009, this cooperation was terminated, FSC ended to exist. In future, no laptops will be sold with the brand "Fujitsu-Siemens" but only "Fujitsu".

VIA S3G UniChrome Pro: The S3 UniChrome (Pro) is a DirectX 7 (without T&L) onboard graphic solution (shared memory) from VIA for laptops. Mainly, it is intended for office activities and hardly suited for 3D games.

T3200: Entry-level dual core processor with a slow performance due to the old Merom core and a small level 2 cache.

78.25%: This rating is not convincing. The laptop is evaluated below average, this is not really a recommendation for purchase.